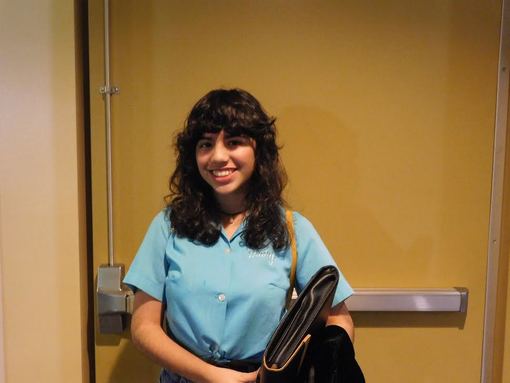 1. Who are you? (Hobbies, skills, interests, passions, extracurricular involvements)
My name is Leilani Jimenez, and I’m a senior at Eagle Rock High School. I love reading autobiographies about artists during the ‘60s/‘70s (Patti Smith, David Hockney, Basquiat, Warhol, Ginsberg, etc) and watching nostalgic films about youth culture and identity. My world usually orbits the realm of screenwriting, drawing, and making collages. I’m pretty passionate about Kyle Maclachlan. <3
2. Where do you see yourself in ten years? Field of work that compels you?
Sort of an underlying core grounding all of my interests is the work involving representation. Although I don’t know what career I’m absolutely set on yet, I really enjoy screenwriting and advocating for legislation. It’s interesting because in film and in the media, the screenwriter bears an artistic influence, and has the power to comment on a valuable part of his or her experience. As a young woman of color, I’ve recognized disparities and misrepresentation in the media directly relating to my identity, and I’ve realized that that medium feels right, getting to work with dialogue and story layered with music and visuals. On the note of legislation, I’ve been in Youth and Government (a Model Legislature and Court program) for two years, and the experience has helped me understand the necessity of communication on a more direct level in order to effect tangible change. Whether it be in film or politics (or both), I’ll be doing what I love!  3. What is your history in connection to Girls Build Los Angeles?
Last year, my friend’s sister and her friends started the club, and I appreciated the fact that the team was working to craft a space in which everyone felt accepted, and were given the resources to listen and be heard themselves, especially since areas of health (especially relating to emotional/mental health) can pass on neglected. This year, with most of the club’s founding members gone for college, I wanted to build on that passion and be a part of a team.4. Why does this project matter to you?
High school is a different experience for everyone, and taking a John-Hughes-Breakfast-Club approach, it’s really difficult to recognize what makes someone the person they’ve become without caring to know who they are, or empathizing. And I think that part has become really lost in our culture; everything can be very surface level and superficial, and invite assumptions. As a person who is very much in her own head a lot of the time, I’ve been actively working to balance all areas of my health and relearn a lot of things I’ve internalized over my personal history and culture. But it’s impossible for one to do that without other people; support, encouragement, resources, and dialogue are only a few components that build a foundation for one to feel more empowered to succeed. If I can alleviate any area of doubt inhibiting a person from feeling like their thoughts don’t matter, or invite someone to a workshop in which they even learn something new about self-expression and their identity, then I’ll be doing what matters to me. :)5. What is your role?
A lot of things have been in flux, so my roles have been shifting. I entered the club as historian (in charge of creative direction, social media, and writing among other things) but have since taken on roles to reach out to different organizations, conduct interviews, lead meetings as co-president with my friend Sara, and organize events. I’m kind of all over the place, and the experience is rewarding. I get to meet a lot of people, so it’s really fun.6. What is your individual goal in this project?
My fourth answer probably elaborates on this one a great deal!

Click here to ed       I am Lesly Diaz in 9th grade. My hobbies are sports, singing, drawing, and photography. As of now I am developing many skills like, learning how to photoshop, learning how to edit little videos, and I assist in branding and organizing photo shoots for my brother and curating  outfits and styles for my sisters online store. As of now I have passion and interests in, fashion, photography, robotics, blogging, and art. This is my first year here in Eagle Rock High School so I haven't been involved with many extracurricular programs but in middle school 7-8 I was in sports like basketball and wrestling. I was also in a music club and I played violin.

2. Where do you see yourself in ten years? Field of work that compels you?

In ten years I see myself getting a 4 year degree in college, having a nice job, and a website for plus size girls/women to purchase clothes from, or a website of photos I have taken around the world.
3. What is your history in connection to Girls Build Los Angeles?

I have no history with Girls Build Los Angeles, but I would love to start making history with this club.
4. Why does this project matter to you?

This project matters to me because I see girls who have so much stress and who are having a bad day and I want to help them and make their day better. I want them have a good day with a big smile on their faces.
5. What is your role?

My role is to help solidify my confidence and to help girls gain their confidence. I want them to reach their level of awesomeness
6. What is your individual goal in this project?

My individual goal for this project is to try to make a difference in the world and to help girls gain confidence so they can take on the world.

1. Who are you?
My name is Adriana Aldana and I advocate for STEM and self-confidence. I’ve taken on multiple leadership roles, including finding sponsors to help lead our class of 2018 and kickstarting the Robotics Team at Eagle Rock High School; being this year’s Junior Captain. There will never be a day when my nails aren’t painted. 2. Where do you see yourself in ten years? Field of work that compels you?
In ten years I see myself as an engineer. Being able to work in the field of STEM is like two magnets, north to north, and south to south- feeling so attracted but also repelling. Women in STEM is still a work in progress, but I believe I’d be a part of the difference. 3. What is your history in connection to Girls Build Los Angeles?
Recently, I went to the screening of Hidden Figures.  Before the screening I heard speeches from the cast of the film and the woman who was part of the Obama Administration also supported the STEM field. Aside from the movie, that entire day was just so empowering. I knew I had to join Girls Build Los Angeles, and I knew how much I can benefit from it. 4. Why does this project matter to you?
This project matters to me because it’s all based on support. I appreciate that. Because without support, we aren’t pushed to do things, we don’t explore new things. And I believe that exploring and going out of your comfort zone is very important. Without testing your capabilities, you don’t really know what you can do. 5. What is your role?
As a general member, my role is to spread self-confidence, promote positive self-esteem, and to empower others. Not only do I do this in our club, but I also try to spread love all around our school, my community, and in life. Promoting our mission statement shows what we’re made of, and as a member, I need to tell more people about G.B.L.A. and what we are doing. 6. What is your individual goal in this project?
Through this project I wish to gain a better sense of confidence and appreciate myself. I come off as bold, spunky, unafraid, but a lot of it is a facade. I egg everyone on, once I’m alone, no one is acknowledging my capabilities. I want to be able to believe in myself and know what I am able to do, without the approval of others.
Powered by